Senator DeSteph believes in smaller, smarter government, and will work tirelessly on behalf of the citizens of Virginia Beach to promote public safety, free-market capitalism, energy independence, and private-sector job creation throughout the commonwealth and our great nation. He was elected to the Senate of Virginia in November 2015 to represent the 8th District. Senator DeSteph has previously served in the Virginia House of Delegates (2014-2016) and on Virginia Beach City Council (2006-2014).

A Desert Storm veteran, Senator DeSteph proudly served in the United States Navy, both as a chief petty officer and as a naval special-warfare intelligence officer. He later joined the defense technology firm AMTI as a senior vice president and co-owner, where he assisted in the growth and eventual sale of the company. 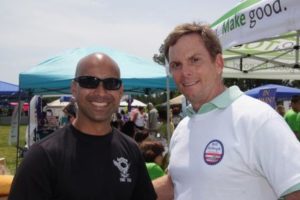 DeSteph has given his time and resources to the city of Virginia Beach for years, coaching youth sports as well as volunteering for the Children’s Hospital of the King’s Daughters, Prevent Child Abuse Hampton Roads, the Noblemen, Hampton Roads Community Care and the Naval Special Warfare Foundation. He also serves on the Boy Scouts of America Tidewater Council Board of Directors, and is an active member of Law Enforcement United, participating in the annual “Road to Hope” bicycle ride for many years.

Beyond politics, Bill is a loving father to both his son and daughter – as well as his fur-baby Maggie, a 3 year old goldendoodle. In his free time, Bill can be found biking with his kids and dog, visiting his daughter in Richmond while she studies at VCU.